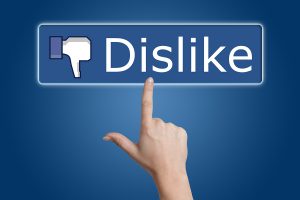 Here are the 11 reasons why those results aren’t as awesome as I’d like them to be, and why you should just go right ahead and avoid Facebook.

1. You aren’t friends or family

Facebook is primarily a network that links friends and family members together. That’s why most of the users are there.

People on Facebook don’t really want to hear from brands. They want to see pictures of their grandkids and find out if people they went to high school are doing better than they are.

You can ignore this point if you are a restaurant owner, club owner, or something similar. Facebook is actually really good for those kinds of businesses.

However, if you’re something a little less fun, like, say, the dentist, then people on Facebook are simply in the wrong mood to read your content.

Granted, if you can make yourself fun, have at. I could see a dentist posting all sorts of funny dentist cartoons once a week doing pretty well, if he knew where to dig them up in order to post them.

Big brands do well on Facebook because people know them. Coke, Pepsi, Zappo’s shoes, and other brands market on a global scale and have millions of people to choose from. Often, these brands have also mastered the art of being fun.

By contrast, you as a smaller business have a limited pool of people to market too. You don’t have household name recognition to push Facebook likes. And you may not be able to afford the special deals and offers that keep people coming back to those pages.

4. You do business in a specific local area

Again, this comes down to the very small pool of people that you can reasonably draw in on Facebook. There are strategies for reaching local people very quickly and easily on Twitter or Google+, but it’s only possible to reach brands this way on Facebook. On Facebook, you can’t just follow local people in the hopes of being followed back: they have to seek you out.

5. There are Better Places to Spend your PPC Dollar

One of the most reliable ways to get business on Facebook is through Facebook’s brand of PPC advertising.

On one hand, Facebook PPC is pretty awesome for its ability to target users by specific demographics: geographic location, gender, age, and the like.

Google PPC, by contrast, drives traffic to your website. You own that. It’s under your control. And it’s where the purchases and appointments happen.

6. It takes a long time to gather followers

The right program can drive existing customers to your Facebook page. But it’s going to take a long time.

Which means that you may be pushing content on Facebook to less than 20 people for six months or longer, which is not exactly rewarding.

7. Your content may or may not appear in a customer’s news feed

Facebook makes decisions about which content appears in the news feed for each user. According to Forbes.com, less than 5% of the customers who “like” your page ever see your status updates. So they may like you, but then they’re going to forget about you.

Bitter news indeed if you paid for PPC ads to get those likes in the first place.

“Like” buttons on webpages only help businesses when customers are particularly proud of their purchase. So if you’re in the business of selling status items like high-end clothes or cars you can ignore this point.

Everyone else should heed The Huffington Post’s warning: adding a Like button to a business that people are embarrassed to use or not thrilled about using actually decreases sales by 25%. So, ah…rectal surgeon? Avoid it.

Let’s face it, Facebook is in direct competition with Google now. And Google+ gives you a clear search engine boost in a way that Facebook never will.

Sure, there’s evidence that Google is taking social signals from all the networks into account, but they’re going to weigh their own a lot more heavily.

10. People will unlike you when they’re done with you

Albarce mentioned that Facebook contests could be treacherous because people unlike your page as soon as the contest is done. So if you’ve spent money purchasing any incentive to get people to “like” your page that money may just be wasted.

And while you have more space to write words on G+, it offers much the same in the way of mood, segmentation, and quick engagement.

You just do not get that engagement on Facebook. For one thing, when someone likes a page you still don’t get the right to write on their walls or address them directly. But it’s really easy to communicate with people on both of the other two social networks.

Your business may be the exception. But for most SMBs my advice is to simply leave Facebook to languish while you build your presence on the other social networks.