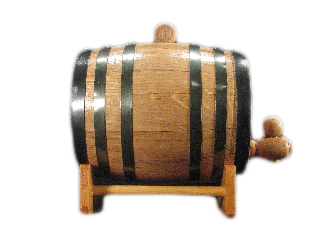 I was out at the Minnesota State Fair a couple weeks ago and I stumbled upon a booth by Deep South Barrels. They sell oak barrels that you can age spirits, wine, beer, and hot sauce in. As a regular vodka drinker myself, I was intrigued so I picked up one of the postcards they were handing out and went on my way.

Then a few nights after I pulled the postcard out of my office drawer because I figured I would order one. When I went to visit their site, however, it didn’t say their barrels could be used for vodka. I sent them a quick message via email to confirm their barrels were suitable for vodka. This was at 9:49 p.m. so I didn’t expect to hear anything back until the next day at the earliest.

To my surprise, I got a response from “Randall” within 15 minutes that I should call him on his cell phone. My first reaction was, “Is this for real,” so I emailed him back if I could call him now. It was 10:05 p.m. after all. His immediate response back was, “Of course!”

I called Randall and he was an incredibly nice guy and explained the whole aging process to me and why you can’t really age vodka in oak barrels. However, he said it would be an interesting experiment as they had never aged straight vodka in their oak barrels before. He said he was going to buy a bottle of vodka tomorrow and age it for two weeks and then let me know how it goes. His only request was that I post the question on their Facebook page so all of their customers could learn from it.

What can I say? I was totally blown away. First, this guy responds to my email within 15 minutes at almost 10 o’ clock at night. Second, he wants me to call him on his personal cell phone so he can give me a detailed answer (instead of just responding and saying “no”). Then instead of saying “it might work” or something like that to make a sale, he gives me the straight skinny on the situation and promises to conduct a test for me so I could be assured it works before I buy.

It is rare to get this level of customer service today. I wish every business operated like this. These guys have the perfect one-two punch. They sell a very high quality product at a fair price and their customer service is simply amazing.

I’m not a heavy beer or wine drinker but I’m so impressed with these guys that I might buy a barrel anyway just so that I can give these guys my business and use their product.

P.S. There are lots of gold nuggets here small businesses could take a cue from. They should be obvious but one that might not jump out unless you visit their Facebook page is how they effectively use their Facebook page. They use it to announce where they’ll be, they ask customers how they are using their products, and they encourage people to share recipes.